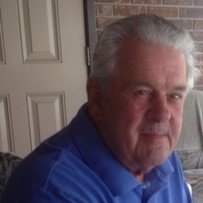 Mr. Jack L. Riegle, age 77 “Everyone’s Favorite Guy” a resident of Lakeland, Florida entered the Kingdom of Heaven on Monday, October 28, 2019 at Good Shepherd Hospice Lakeland. Mr. Riegle was born September 27, 1942 in Greenville, Ohio to Alfred Ottwell and Dorothy Violet (Sheperd) Riegle. He grew up in a small community in Ohio where he graduated from Ansonia High School. He and his wife have been Lakeland residents since 1989 coming from Columbus, Ohio.  He was self-employed for several years before becoming a full-time employee of Green Construction. When he semi-retired 9 years ago he went to work part time for Ace Hardware/Crowder Brothers in North Lakeland. Jack enjoyed working there and his building knowledge came in handy for the customers.  Jack attended Victory Church in Lakeland for over 20 years and was a 32nd degree Mason. He was a Christian man and always lived his life doing the right thing and helping others. He will be greatly missed by all. He was preceded in death by his parents; son – Barry Riegle; sister – Darla Robbins; granddaughter – April Peters; great grandson – Landyn Peters; nephew – Tyler and niece – Cheryl. Jack is survived by his loving & devoted family;Wife of 40 years: Barbara Riegle of Lakeland, Florida. 2 Sons:  Troy Riegle of Springboro, Ohio.Rick Peters of Lakeland, Florida. Daughter:  Julie (Richard) Koochagian of Leesburg, Virginia Sister: Roberta (John) Westfall of Greenville, Ohio. 7 Grandchildren:  Amber, Tyler, Courtney, Austin, Sara,  Savannah and Emma, 2 Nieces: Penny and Jackie. Nephew: Seth.

In lieu of flowers the family request’s donations in Mr. Riegle’s name to; The American Lung Cancer Association 1-855-993-6637.

Funeral service will be held 11:00 am Saturday, November 2nd at Victory Church “Chapel”, 1401 Griffin Road, Lakeland, Florida. Visitation will begin at 10:00 am at the church in the chapel. There will be a luncheon following the service at the church. Jack will be inurned at a later date in Greenville, Ohio with his wife Barbara, their 2 dog’s ashes as well as being next to his son Barry.