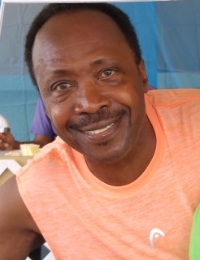 Mr. Romeo Milliner, 75 his sunrise August 22, 1944 in St. Thomas, US Virgin Islands and his sunset was Friday, May 29, 2020 in Lakeland, Florida Romeo’s life began in St. Thomas, US Virgin Islands, son of Ludwig Godfrey and Christina Evangline (Chinnery) Milliner. When he was 9 years old they moved to New York, where he attended New York schools and graduated from Seward Park High School. In 1964 he met his wife Marilyn at a New Year’s party that she attended with a friend and he with his best friend, Joe Varlack, who later was his best man. They exchanged names with him introducing himself as Romeo and Marilyn responded sarcastically “my name is Juliette”. They later married in January 1968, after a 3 year courtship. After 3 years of marriage Romeo was informed he had kidney disease and needed a transplant, which he received from his brother, Bennett which that kidney lasted 31 years. Later he was blessed to receive another kidney from his one and only daughter Rachelle, this was 17 years ago. Romeo had a lot of different occupations; owned a produce store with his father, computer operator, taxi driver, real estate agent and real estate broker he had his own office. He retired March 31, 2010 after 19 years of service as a Registered Nurse, from Nassau University Medical Center. He was a member of Chi Eta Phi Sorority Incorporated, Kappa Eta Chapter, Incorporated (A National Nursing Organization). While living in Long Island, New York, he was a volunteer fireman for the Lakeview Fire Department. His youngest son, Brandon who he would take to the Fire Station with him on many occasions followed in his footsteps and is also a volunteer fireman and works for the New York City Fire Department. Romeo enjoyed gardening, having his hands in the soil; he had such a Green Thumb!! He loved planting & harvesting fruits &vegetables. One of his passions was acting, where he was in several musicals. He also enjoyed swimming in his pool!! When he relocated from Long Island to Auburndale, Florida 10 years ago they had a home built and it had to have a pool which he actively used. They relocated to Auburndale, Florida because Marilyn, his wife, wanted to be closer to their young grandchildren Kamiah & Khalil, Romeo always wanted to please Marilyn. He loved talking, giving life lessons to his children, grandchildren and anyone else in need of advice or directions on how to navigate through life. He has been an inspiration, a leader and teacher to the generations that are here as a result of him. Romeo taught his family to honor and respect others. He was a member of the First United Methodist Church in Auburndale, where he loved to sing and sang many solos with the church during their Christmas & Easter programs. Romeo loved the Lord, he knew the Lord and knew it was though the Lord only that gave him the amount of time to see his children, grandchildren & great great grandchildren. He always said how blessed he was by having those kidney transplants. He loved traveling, dancing, listening to all types of music and was passionate in following politics!!! He was a man of great integrity, who didn’t keep his monetary blessing to himself and was always contributing to numerous charities. He was preceded in death by his parents – Ludwig Godfrey and Christina Evangeline (Chinnery) Milliner and brother – Kevin Frett. Romeo is survived by his loving & devoted family; wife of 52 years – Marilyn; 3 children – Rachelle, Kendall (Lori) and Brandon; 5 siblings – Patsy Earle, Bennett, Noreen Roper, Basil and Godfrey (Deborah); 5 grandchildren – Jarron (Krystal), Rashaun, Cheyenne (Lakia), Kamiah and Khalil; 4 great grandchildren – Jarron, Kamren, Aaliyah and Chayse; 6 Aunts – Yvonne Bowsky, Leona Smith, Susanna Brin, Esther, Leila and Rose; a host of nieces, nephews, cousins, godchildren, extended family and devoted friends. (We are all “tourists” and God was Romeo’s travel agent who had already fixed his routes, reservations & destinations. While here, Romeo trusted in him and has enjoyed his “trip” called life)!!

A poem submitted by his loving wife, Marilyn, If tears could build a stairway and memories a lane, I would walk right up to heaven and bring you home again.

To send flowers to the family or plant a tree in memory of Romeo Milliner, please visit Tribute Store