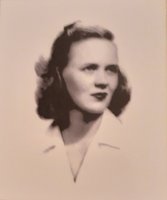 Cynthianne Say Calhoun, daughter of Dr. David Lester Say and Martha Dunbar Say was born October 16, 1922 in Cross Creek, PA.  She is survived by her three children, Beth Calhoun Manor, Noel Alexander Calhoun III, and David Lester Calhoun, Judith S. Calhoun, and her 6 grandchildren:  Dr. Marty Manor Mullins, (John); Dr. Scott C. Manor, (Rebecca); Ann Elizabeth Calhoun, (Rob Adler); Laura Calhoun Ohms, (Jay); David Louis Calhoun, (Ashley); John Adley Calhoun, (Kelsey); and she is also survived by her ten great-grandchildren.  Mrs. Calhoun graduated from PCW (Pennsylvania College for Women) in Pittsburgh, PA in 1944 with a degree in Social Work.  She was a probation officer for the juvenile court, and a counselor for under privileged children.  She married Rev. Noel A. Calhoun, Jr. in 1945 and was married until his passing in 1995.  She was a lifelong Chautauquan.  In addition she was a lifelong helper of her husband while he pastored in NJ, PA, OH, and FL.  They retired to their home in Chautauqua, NY where she lived until her health caused her to live in FL near her son, David L. Calhoun.  She died of old age at nearly 99 on July 19,2021.  Cynthianne fervently held to an unwavering commitment to Jesus Christ, her Lord and Savior.  There will be no memorial service.  A graveside service for the immediate family is planned.

In lieu of flowers, donations may be given to Wounded Warriors.  They can be reached at 855-448-3997 or woundedwarriorproject.org.